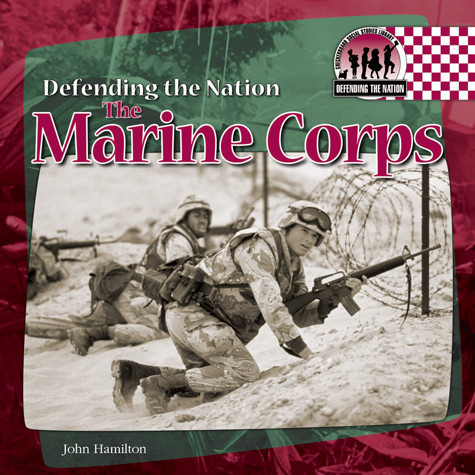 This book introduces the U.S. Marine Corps, which is closely associated with the U.S. Navy. Historical information covers the Continental marines of the Revolutionary War, as well as vital Marine Corps participation in the Mexican War, World War I and the battle of Belleau Wood, World War II, the Korean War, the Vietnam War, Afghanistan, and Iraq. The book highlights key Marine Corps commanders such as two-time Medal of Honor recipient Sergeant Major Daniel "Dan" Daly and former chairman of the Joint Chiefs of Staff General Peter Pace. Other chapters introduce readers to the organization's hierarchy with a sidebar on officer and enlisted ranks, requirements for enlistment, weapons and combat training, the U.S. Naval Academy, officer training, and the training and job opportunities in the Naval ROTC and the Marine Corps Reserve. Other sections introduce the reader to the Marine Corps' unique role in military service abroad, as well as the aircraft and weapons they depend on, such as the CH-46 Sea Knight helicopter, the F/A-18 Hornet airplane, the AV-8B Harrier jet, amphibious assault vehicles, and other unique transport options, as well as the M16 rifle, the M9 Beretta pistol, grenade launchers, night vision goggles, and other advanced technology that helps the Marine Corps train for the future. Full-color photographs, sidebars, fun facts, a graphic timeline, a glossary, and an index accompany this easy-to-read text.